By G D | Gynae Visit To Gizo | No Comments

It was a somewhat inauspicious start. The FlySolomons plane bringing us from Honiara to Gizo was named Megapode, after an endemic bird that is largely flightless. However the flight was flawless as was the water taxi trip from the airstrip to the town across the beautiful but shallow coral lagoon.
This was our second visit to Gizo so we knew what to expect……the heat and humidity, the idyllic tropical scenery, the friendly people, the bustle of the local market and the red betel nut spit stains on the road. The hospital though is excellent, having been built by the Japanese after the old one was washed away in a tsunami 9 years ago. Importantly the operating theatres are air conditioned.
Women with gynae problems had been notified of our visit and over two hundred had travelled to Gizo from all over the Western Province for consultation and screening for possible surgery. The first day was largely spent reviewing over a hundred of these and selecting the most urgent for surgery. These were mainly large pelvic masses (ovarian tumours and fibroids) requiring Laparotomy and Hysterectomy. Many were severely anaemic as a result of years of heavy bleeding but only one required blood transfusion. As there is no blood bank, a compatible relative was asked to donate. 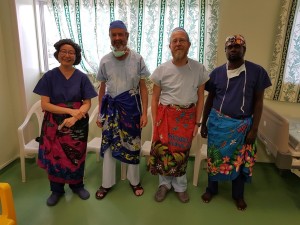 We only had 3.5 days operating but did 22 operations, 11 of these were major laparotomies, including 8 total abdominal
hysterectomies. The remainder were mainly cone biopsies for cervical premalignancy. We were ably assisted by 3 local hospital doctors and by Dr Briley Pinau an O&G trainee in Honiara. Dr Leo’s expertise in regional anaesthesia was very valuable and even cases requiring a large midline incision were able to be done safely and effectively under a spinal/epidural block.
Thankfully, as on our previous visit in April 2015, there were no significant postoperative complications and the local doctors have reported that all our patients are recovering well.
Sadly, cervical cancer is a common problem and we had to turn away 4 or 5 young women with advanced, inoperable cancer. There is a huge need for national HPV vaccination and cervical screening programs.
There is also an urgent need at Gizo hospital for an operational CO2 insufflator and CO2 gas bottles to allow laparoscopic procedures as well as a better range of surgical sutures ( in particular 1 Vicryl)
We have been invited to return next year, ideally every 6 months as there are no local gynaecologists visiting the area. It would also be ideal if a local O&G trainee was able to attend as a regular part of their training.