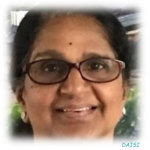 Vasu Santhanam is DIASI’s Gender Equality and Protection Officer, and first person to contact for all maters relating to Gender Inequality.

Vasu was born in Chennai, India, and migrated to Australia in 1972, living in Newcastle with her husband, a surgeon who worked at Royal Newcastle and Belmont public hospital.  Vasu volunteered in the Solomon Islands in January 2017 and was crucial to the development of women’s health initiatives at Gizo Hospital.

Vasu is a keen supporter of women’s rights and of gender equality and social inclusion (GESI).