The first DAISI trip to the Solomon Islands was by volunteers Dr Gary McKay, Dr Sepehr Lajevardi to Gizo hospital the last week of December 2015 and first week of January 2016.

They were joined by two medical students Gareth Iremonger (Aukland) and David Maze (University of Sydney) . 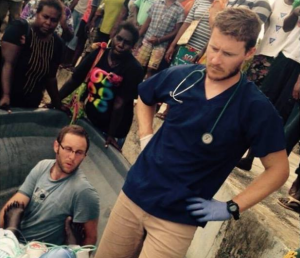 Medical students Gareth Iremonger and David Maze, were the only volunteers in the Gizo hospital emergency department during this visit due to the sudden return of the Australian ED registrar to Australia with Dengue fever.

For Dr Gary McKay (colorectal and general surgeon) and Dr Sepehr Lajevardi (general surgical registrar) it was a fact-finding mission, however many surgical cases were able to be performed during this 2 week visit.