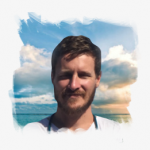 Gareth, an aerospace physiologist, flight lieutenant in the Royal New Zealand Air Force and RMO at North Shore Hospital, Auckland did his medical student elective at Gizo hospital from November 2015 until January 2016, spending over 3 months working full-time at Gizo hospital. Half way through his rotation, he and another medical student were the only foreign aid in the emergency department, with Gareth largely responsible for treating emergency cases and was the elected Vice- Chair of DAISI from 2015-2017