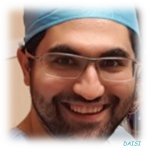 Dr Sepehr Lajevardi is a plastic surgeon from Sydney and Co-Founder of DAISI and current DAISI Board member, as well as a member of the DAISI Audit and Risk Committee.

Dr Lajevardi, along with Dr McKay, founded DAISI first volunteering in the Solomon Islands in January 2016, doing mainly plastics and hand/tendon surgery. He returned again in June 2017 and returns on a regular basis. Dr Lajevardi has been instrumental in organising the donation of much needed medical supplies and organising funding grants for DAISI projects, as well as fund raising and organisation of the DAISI Charity Ball.

Dr Lajevardi is passionate about developing world medicine with future trips to the South Pacific planned for later this year.

Dr Lajevardi was the elected Treasurer for DAISI from 2015-2017, and the elected Chair of DAISI in 2017-2019,  Currently is serves on the Board, and also the Audit and Risk Committee.