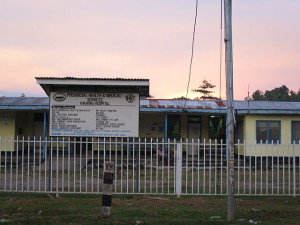 Kirakira is located on the north coast of Makira (formerly called San Cristobal), the largest island of the province. It has roads running 18 kilometres (11 mi) east to the Warihito River and 100 kilometres (62 mi) west to Maro’u Bay.

HISTORY
There is evidence of a Spanish presence in Makira as far back as 1568 when the island was named the San Cristobal. The Marist Catholic missionaries in the 1840s knew the island as Arosi and the Anglican Melanesian Mission in the 1880s called it Bauro. Australia has a shameful history that many are not aware of with many Makira men and some women participants in the indentured labour trade to Queensland (807 between the 1870s and 1903). These men and women were treated as cheap labour mainly in Australia’s sugarcane plantations.

ATTRACTIONS
Kirakira is “Off the beaten track” and receives very few visitors. Kirakira has its own beach, with travel easily accessible using the red and blue pencil boats. 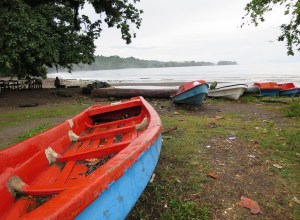 There are unique surfing breaks on Makira Island with its black beaches and wonderful snorkelling particularly in the Islands of just off Kirakira.
There are white sandy beaches surrounded by opalescent waters at the “Three Sisters” Island group and Ugi Islands. 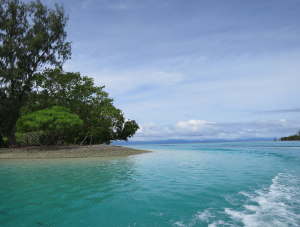 These waters are dotted with coral reefs where one can spend hours exploring and finding an exhilarating variety and species of tropical fish.
The Islands can be accessed by an outboard motor boat that takes about 45–60 minutes to reach from Kirakira harbour. It makes a perfect day trip for a group of 3–6 people. The cost of Boat Hire, A couple of Guides and Petrol for a Day Trip is around $1500–1800 SBD. If you have a group of 4–6 people and take along some fresh fruit and coconuts for lunch, this can make for an amazing daytrip for about US$50 per person. If you are interested in flora and fauna then there are many exciting bird-watching trails that you can find.
Kirakira is famous for its dance and celebration with the banana festival in the first week of June. 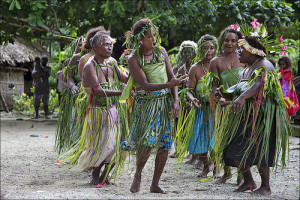 Some cultural practices are unique to Makira – like ancient fishing methods, crocodile wrestling and the shark hole underneath a church altar at Suholo village in Ulawa. A highlight of this area is the island’s annual land crab harvest – it’s a must see.

GETTING THERE
The Ngoangora (IRA) Kirakira Airport is served by Solomon Airlines, which provides flights to Honiara and other destinations. The Airport is a grass strip and receives flights 4 times per week. Solomon Airlines, the national carrier, flies in and out of Kirakira. It is a 45-minute flight from Honiara. Planes landing at the Airport vary in size from a 6-seat “Island-Hopper” to a 36 Seat “Dash 8” twin propeller jet. If there is too much rain, the airstrip can be too muddy to allow the planes to safely land. 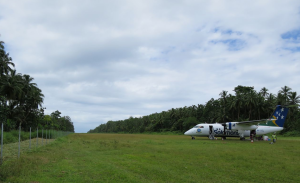 FACILITIES
KiraKira does have electricity and running water. The electricity is produced by a diesel generator. There are often periods where there is no power each day for 1–2 hours while the generator is maintained. The town is nestled on the bay opposite the airport. Most people live in traditional Solomon Island houses. There is mobile phone coverage in Kirakira that allows for talk and text communication but not mobile Internet services. The Internet can usually only be accessed at the post office. Despite an annual rainfall in excess of 3 metres, there are challenges associated with securing the water supply for the town. A centerpiece for the community is a full sized soccer oval.

ACCOMMODATION
The Freshwinds GuestHaus in Kirakira is the most popular and comfortable  accommodation in Kirakira.  One room is air-conditioned, the others all have ceiling fans. Single rooms with an ensuite and dinner and breakfast for about $140AUD per night.  You may get a reduction in price if you mention that you are volunteering. It is also conveniently located across the street from the hospital and has the best amenities on Makira.  Noel Mamau Is the manager and can be contacted by phone: +677 50073 or by email: nmamau@gmail.com 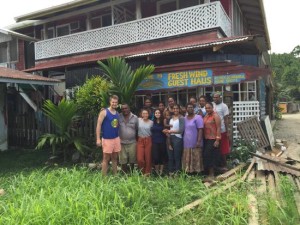 HOSPITAL FACILITIES
Kirakira Hospital, Makira Province is a small 60 bed hospital, on the small island of Makira. There are two full-time government employed doctors based at the hospital, Dr Arnold Nguduame (Nedical Director) and Dr Grace Rara. The hospital is supported by a team of about 40 dedicated nursing staff. There are two staff on a 2-year exchange program from Japan, that includes, Yasuko Chiba a registered nurse and Takuya Shizume, a physiotherapist. With very limited resources the hospital provides very effective health care to the community. Children have access to a comprehensive immunisation schedule and there are midwives who provide antenatal care and assist with deliveries. There is the capacity to manage infectious diseases such as TB and Malaria, which are common in KiraKira.
The hospital does have plain radiography and an ultrasound machine and there is access to a very limited number of blood tests. The hospital’s pharmacy has good supplies of antibiotics, anti-malarials and a limited supply of analgesics and cardiorespiratory medications. There are oxygen cylinders. Ketamine sedation is available and allows for the doctor on the Island to do quite a range of minor procedures such as drainage of abscesses and setting of simple fractures.

There is a basic operating theatre. More recently appendicetomy and caesarean sections has been performed but not with any regularity as surgical visits are uncommon with most surgical cases going to National Referral Hospital (NRH) in Honiara and can be transported on one of the four commercial flights that leaves the island each week.  The most common cause of trauma in Kirakira is falling from a Coconut tree. From a young age children and men climb coconut trees to try and harvest a few coconuts or simply because they are thirsty and would like a drink. They are often 5 or 6 metres above the ground and when they fall unfortunately it is the cause of many broken bones.

STAFF & CONTACTS
Kirakira is a popular distination for Medical Students from Bond University, the Gold Coast, Australia. Medical students can apply for an elective in Kirakira Hospital, with a large number of students coming from Bond University from Gold Coast in Australia organised by DAISI® member a/Prof James Fink.
Dr Arnold Nguduamae (Provincial Health Director) and Grace Rara are currently the only doctors in residence at Kirakira Hospital. member John Harara. is the Director of Nursing and integral to the organising of any successful surgical visits to the hospital.