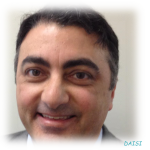 Mark designs and develops medical equipment, with a keen interest in Pacific Islands development, having volunteered in the highlands of Papua New Guinea for a year in 1984, where he learnt to speak Pidgeon and again to the Enga Province of the Highlands of PNG in 2018 with DAISI with multiple trips since then.

Mark is a keen supportor of DAISI and has been involved in reclaiming and sending medical equipment to PNG as well as their ongoing maintenance. Through his company Horten Medical, Mark has also sponsored school fees for children in Kagua (Souther Highlands of PNG). Mark is actively involved with DAISI, and a regular sponsor to the Annual DAISI Charity Ball. Mark was part of a DAISI volunteer trip to Enga Province in the highlands in PNG in November 2018 where he is the DAISI representative. He has conducted multiple DAISI trips to PNG since then. He has been instrumental in logistics for repairing and maintaining existing equipment in the Enga Province. Mark is married is married to his doctor wife Maryanne, and has three sons aged , 18, 16, and 13. Mark hopes to return to PNG with his sons.