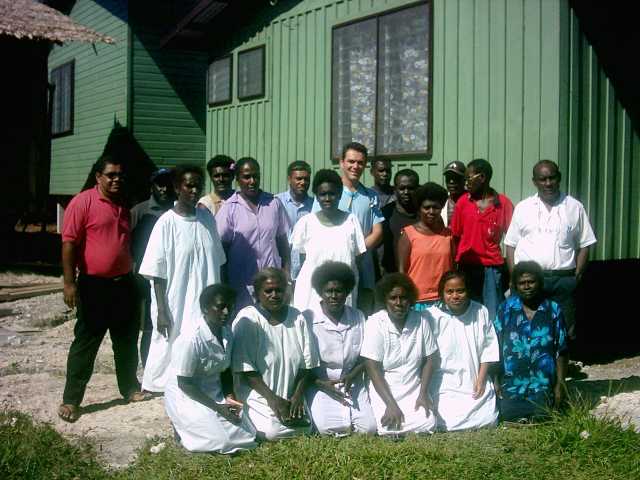 GEOGRAPHY
Taro hospital is a 20 bed hospital located in Taro, the capital of Choiseul Province in the remote far north of Solomon Islands.

HISTORY
Australian GP Dr Chris Millar was the first medical officer at Taro hospital. Lazarus De Niko has been the medical director since 2007.

ATTRACTIONS
Choiseul province’s main attraction is its virgin, untouched natural wonders, like nesting sands for the endangered Hawksbill turtles and whales have also been sighted in the surrounding waters. Choiseul is home to rare pottery and weaving. Choiseul province also boasts the highest number of sites declared marine-protected area. These sites are naturally rich in marine biodiversity that needs to be preserved. The flora and fauna are both charactistic of Australia and New Guinea. The biggest mammal is the endangered dugong, a sea cow which lives in the waters near Rob Roy and Taro Island. The known birds in the Choiseul province are the Sanford’s Fish Eagle (Haliaeetus sanfordi), the Pacific Black Duck (Anas superciliosa), and the Eastern Reef Egret (Egretta sacra). Until the beginning of the 20th century, it was the only habitat of the now extinct Choiseul Crested Pigeon (Microgoura meeki). Choiseul is also an important breeding place for the Loggerhead sea turle (Caretta caretta).  The nearby waterfall, is a popular tourist destination, but be careful as there are crocodiles in the area.

FACILITIES
Taro has telephone and internet and electricity for 12 hours a day (from 10am until 10pm), with fresh rainwater for drinking.
It is a small hospital located walking distance from Choiseul Bay airport. It serves about 26,000 people and also drains approximately 3,000 patients from Shortland Islands and sometimes Bougainville.  Operating theatre facilities since the departure of Dr Chris Millar have declined, with no anaesthetic machine, a non-functioning operating table, and no monitoring equipment.  It is not suitable for general anaesthetic procedures, and resources are even limited for minor cases under local anaesthetic.

GETTING THERE
Although quite remote, there are at least three direct flights from Honiara per week. The flight takes only 1 hour.

HOSPTIAL FACILITIES
Staff consist of 2 doctors (Dr De Neko and Dr Matthew), 10 nurses, and a number of other supporting staff. Taro hospital receives referrals from 18 health clinics across Choiseul.  There is a single operating theatre, with compressed oxygen, diathermy (though return pad missing), basic medications for procedures (diazepam and local anaesthetic).  At this stage there is no anaesthetic machine, oximetry, capnography or ecg monitoring equipment.

ACCOMMODATION
Accommodation is very limited and basic.  There are no hotels in Taro, but there are two basic guest houses.  ES Beach Lodge (see photo below) offers magnificent water views overlooking Choiseul Bay harbour from the dining and bar areas with frequent sightings of pods of dolphins swimming through the harbour, and marine life on the sandy shore. 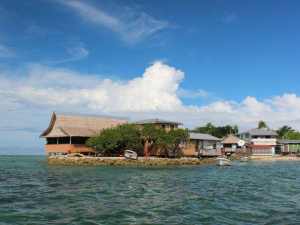 Island Transit Motel (see photo below) is basic budget accommodation in Choiseul Bay.  There is no restaurant, but a shared kitchen with the most basic facilities including gas cooker.  There is no fridge.  Rooms have a single ceiling fan but no mosquito nets.  Electricity runs from 8am until 4am. 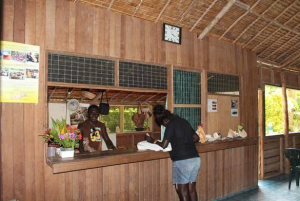 STAFF & CONTACTS
To organise volunteer work at Taro hospital  you can try to contact Dr Lazarus De Neko (Medical Director Choiseul Provincial Health Services) +677 63190 or mobile:  +677 7405217, but do not expect a reply to emails.  More reliable means of communication can be obtained by by contacting Mr William Timba (Chief Nursing Officer – Taro Hospital).