Dr Linda Fenton and Dr Mike Buin operated Mon 27th May, Tue 28th May, with relaxation Wed 29th May, and further operating on  Thursday 30th and Friday 31st May.  In total 58 operations were performed. Head and Neck cases done included three parotidectomy, 4 thyroidectomy, and one large rannula.  All patients woke up and were discharged home voicing content with happy smiles (very important after neck surgery where marginal nerve and recurrent laryngeal nerve can be damaged).  A reversal of ileostomy was performed for a patient who Prof Peter Hewett (Colorectal surgeon from Adelaide) had done a low anterior resection on 3 months earlier for rectal cancer.

A perforated appendix and gallbladder were done in an open manner (rather than laparoscopic) due to the anticipated level of difficulty.

Dr Chris Jones volunteered in the outpatient department, where he was involved in the screening and preparation of surgical paitents.  Dr Jones also worked in the Emergency Department, where he worked on his own the first part of the week.  The second part of week Dr Jones worked in partnership with a visiting team from St Vincent’s Public Hospital Emergency Department.  The volume of work was large, with many emergency presentations.  Resources were stretched, with  so many presentations.  Pathology ran out of reagents for many test, with reliance only on Haemoglobin, ESR, Potassium and platelets.  Urinalysis test stripa also ran out, so direct microscopy looking for blood cells was required. The second half of the week Dr Jones participated in a CPR course for twenty ED nurses (see photo below), and a respiratory performing lung function tests on 100 patients. 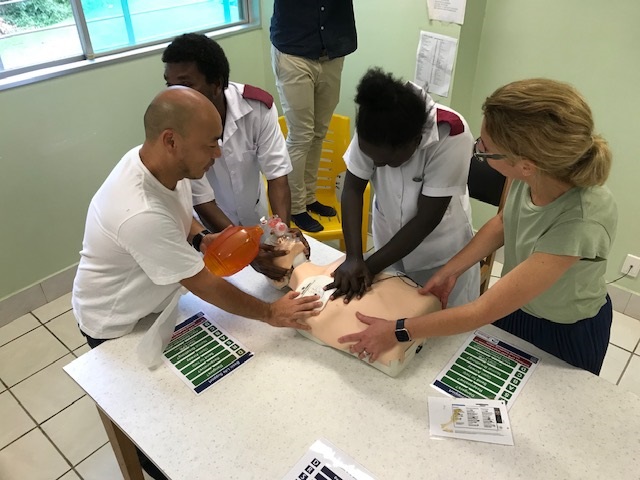 Jeff Fetterplace was responsible for operating theatre staff morale and was the chief “catcher of fish” for the hospital kitchen.

The DAISI team had a day of relaxation on Saturday 2nd June and departed Gizo (Nasatupe) airport Sunday 3rd June returning to Australia.

DAISI would like to give a special thanks to head nurse Henrieta Jagilly and all the hard working operating theatres staff at Gizo Hospital including Clayton, Viola, & Patricia.  Special thanks also to local anaesthetic registrar from Gizo Hospital Dr Unu Gagahe who did a fantastic job managing anaesthetic support. Many thanks also to Dr Aruna Shiva, all all the volunteers from St Vincent’s Emergency Department.