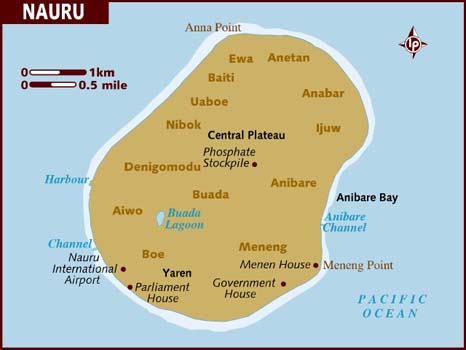 Nauru, formerly known as Pleasant Island, is an island country in Micronesia, a subregion of Oceania, in the Central Pacific. Its nearest neighbour is Banaba Island in Kiribati, 300 kilometres (186 mi) to the east. Nauru is the smallest state in the South Pacific.

Nauru is a phosphate rock island with rich deposits near the surface, which in the past allowed easy strip mining operations. Nauru boasted the highest per-capita income enjoyed by any sovereign state in the world during the late 1960s and for a period of time was considered a tax haven.  However phosphate stores are now depleted resulting in a marked downturn in Nauru’s economy. From 2001 to 2008, and again from 2012, Australia has been responsible for sending its refugees to Nauru for “processing” in exchange for aid from the Australian Government.

In 1999 the state run Nauru General Hospital and private run Nauru Phosphate Corporation Hospital amalgamated into the state-run Republic of Nauru Hospital (RONH). This hospital provides free care to all residents of Nauru.

The German based HAHN airlines offer direct flights from Brisbane to Nauru international airport twice a week (Wed & Thur)  with flight time 4.5-6 hours. Flights are not cheap being $2000 return.