By G DJuly 6, 2017Laparoscopic surgery takes off in Solomon Islands 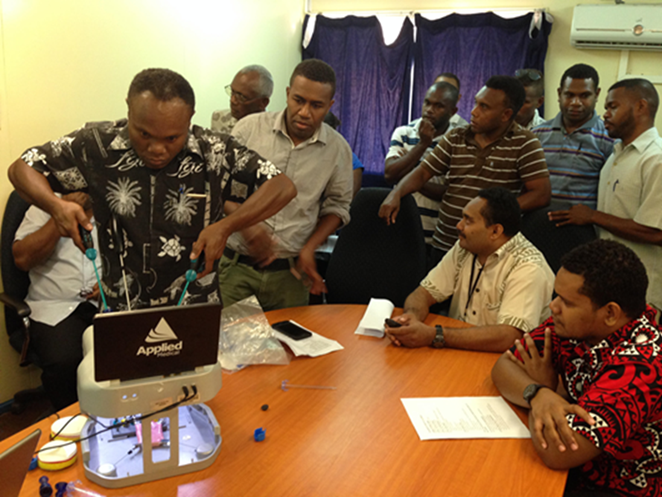 Although more than fifty years since laparoscopic surgery first began worldwide, surgeons in the Solomon Islands have made up for lost time, rapidly acquiring these skills thanks to a team of volunteer surgeons and anaesthetists under the umbrella charity “DAISI” (Doctors Assisting In Solomon Islands), with a second and third DAISI laparoscopic workshop at NRH conducted in April and June 2017. These three workshops involved 25 volunteer specialist surgeons and anaesthetist’s from Australia 4 registrars and 6 nurses.

Dr Scott Siota, a general surgeon from NRH, and his team of registrars are now doing diagnostic laparoscopic and laparoscopic appendicectomy independently.

The acquisition of laparoscopic equipment was due to the generosity of a number of hospitals, MedEarth and Olympus, and was shipped over to the Solomon Islands thanks to the support of Rotary and DAISI.

NRH is the only tertiary hospital in the country, located in the capital city Honiara.  It receives transfers and admissions from almost one thousand islands across the nine provinces that make up the Solomon Islands.  With no CT scanner in the country, diagnostic laparoscopy, now available at NRH, makes sorting out the “undifferentiated abdominal pain” much easier, allowing quicker diagnosis and treatment, and discharge from what is already an overly burdened hospital.

In the West, laparoscopic surgery typically involves the use of disposable single-use equipment.  This reliance on disposables is however problematic for the Solomon Islands, being expensive, and ugly with these disposables often ending up as land-fill.  Therefore the introduction of new technology and procedures needs to be culturally appropriate, and one of the main objectives of DAISI, is to promote sustainability and provide re-usable instruments to avoid a reliance on disposables.

Laparoscopic surgery has a difficult learning curve.  A systematic approach is required for teaching safe laparoscopic surgical skills, with ongoing teaching sessions scheduled to occur on a regular basis, and organised totally by volunteers.  Teaching also needs to include dedicated nursing staff, to ensure the necessary equipment is sterilised and cared for and stored appropriately. 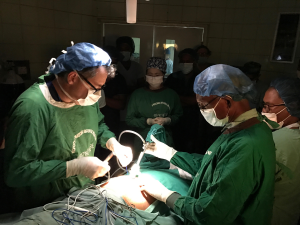 Fortunately, due to the incredible generosity of so many individuals and organisations, DAISI has been able to send three shipping containers in the past two years with much needed medical equipment. 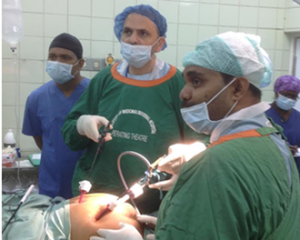 This year alone over 83 specialists have volunteered in the Solomon Islands with DAISI.  “It never ceases to amaze me how much generosity there is amongst my surgical and anaesthetic colleagues.  The trick is tapping into and directing this generosity” says Dr Gary McKay, founder of DAISI.

With only five local surgeons serving the entire population of 580,000 in the Solomon Islands, the surgical caseload is often overwhelming.  This represents a one hundred fold difference to Australia.  The per capita income is also one hundredth that of Australia.

Article by Dr Sepehr Lajevardi who is currently a plastics registrar and Treasurer of DAISI.