By G DDecember 12, 2016Lowie institute reports benefits of including the Pacific Islands to Australia's Labour Market 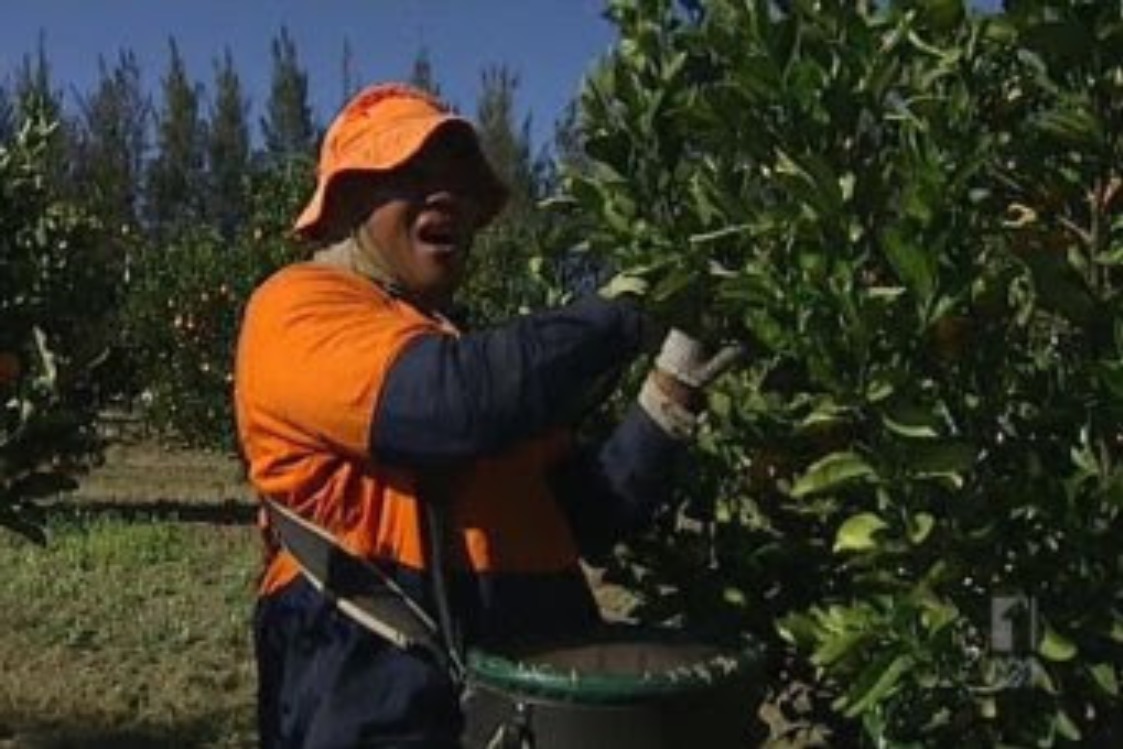 KEY FINDINGS OF LOWIE REPORT
Recognising the importance of the Pacific, Prime Minister Turnbull has called for a ‘step-change’ in Australia’s engagement with the region.
The profound development benefits that can be delivered to our nearest neighbours through greater access to Australia’s labour market is an element missing from the current migration debate.
Allowing just 1 per cent of the Pacific’s population, an average intake of under 3000 people, to work permanently in Australia would deliver more benefits to the Pacific peoples by 2040 than Australia’s current aid Program.

EXECUTIVE SUMMARY
A stable and prosperous Pacific Islands region is essential for Australia’s security and foreign policy. Australia is investing significant amounts of aid in the development of the region with very mixed results. The economic, demographic, governance, and climatic challenges the Pacific faces will make sustained development of the region even more difficult in the years to come. It is for this reason that Prime Minister Turnbull has committed Australia to a ‘step-change’ in Australia’s engagement with the Pacific built on fresh ideas.

One idea that would produce a ‘step-change’ would be to make it easier for citizens of the Pacific Islands region to work in Australia. This would allow citizens of the region to earn an income far above their potential at home, and considerably improve their living standards.

This Analysis assesses the impact of two models of such a proposal: one capped and one uncapped. It finds that allowing just 1 per cent of the Pacific’s relatively small population to work in Australia would bring more benefits to the people of the Pacific than what Australia currently gives in aid. Measures would need to be taken to manage risks and costs to Australia; however, these risks should be weighed against the significant benefits it would bring to Pacific Islanders.

“My Government recognises that Australia’s interests in the region and the complexity of the challenges we face demands more engagement at every level, more integrated policy and fresh ideas. We are committed to a step-change in our engagement.”[1]

A step-change in our engagement is indeed necessary, because the development prospects of many of Australia’s neighbouring Pacific Island economies are bleak.[2] Disadvantaged by remoteness from major markets, small market size, weak governance, and rapidly growing populations, it is difficult for Pacific economies to follow conventional pathways for economic growth. There is certainly no track record of success. The average annual income of people in these economies in 2015 was around $3900 (purchasing power parity (PPP) adjusted in current international dollars), just 8 per cent of the Australian average.[3]

Australia has a strong interest in seeing a stable, prosperous, and developed Pacific. The region is part of Australia’s near neighbourhood. Former Australian Prime Minister John Howard memorably referred to the Pacific as “our patch”.[4] Australia and New Zealand are the first countries that Pacific Island states look to for assistance after natural disasters or conflict. A stable Pacific is critical to Australia’s security. It is also an area where Australia has significant economic interests, including close to US$1.5 billion in trade per annum and US$15 billion worth of investments.[5]

The importance of the Pacific Islands region to Australia is further reflected in the amount of aid that Australia has invested in the region. In real terms it has given over US$40 billion since 1960. This is almost two-thirds of total Australian aid over that period.[6] The results of this assistance have been mixed at best. While aid has improved welfare and governance throughout the Pacific, as a whole the human development indicators of the region remain poor.[7] There are limits to what foreign aid alone can achieve. It is too finite, its delivery too fragmented, and it is too limited in its ability to change domestic incentives in developing countries to have a deep impact. Aid helps, but in the Pacific it has rarely been transformative.

Meanwhile, the challenges facing the Pacific Islands region are growing. Globalisation has not overcome the problems of remoteness and size as was hoped. Progress on governance remains stalled in many countries. Natural disasters and climate change will be major obstacles to future development. Compounding this, the region’s population, already facing a significant youth bulge, is expected to grow by a further 49 per cent in the next quarter of a century. By contrast, Australia’s population will grow by 29 per cent.[8] Any incremental improvement in development indicators across the Pacific region in coming years is likely to be overwhelmed by these challenges.

At best, current approaches to development in the Pacific will see the region continue to muddle through; at worst, the region’s development levels will decline to a point where some states in the region will become unstable and, in some cases, unviable. It is time, therefore, to debate fresh ideas that will translate Prime Minister Turnbull’s call for step-change into action.

One idea that has already been floated in a variety of forms would be for Australia to allow a significant number of Pacific Islanders to work in Australia. This would enable citizens from Pacific Island countries to earn an income far above their potential at home and considerably improve their living standards. It would also open opportunities to the Pacific Island community that are far beyond what would otherwise be within reach. Indeed, in a recent radio interview Prime Minister Turnbull acknowledged the connection between providing greater access to the Australian labour market and improving development prospects in the Pacific.[9]

The Prime Minister’s comment was delivered in the context of what has become an increasingly polarised debate about both skilled and unskilled labour migration to Australia, and, in particular, the impact of this on Australian workers. What has largely been missing from that debate, however, has been consideration of the development benefits that could be delivered to Australia’s nearest neighbours by increasing their access to Australia’s labour market.

The aim of this Analysis is to calculate those benefits. It does so by considering two models for increasing Pacific access to Australia’s labour market: one that would allow for relatively unrestricted access (hereafter the ‘uncapped model’); and a second model that would provide for more restricted access (hereafter the ‘capped model’), whereby a lottery quota system would be used to control the flow of Pacific Islanders who could come to Australia per year.

The uncapped model illustrates the full transformational impact such a proposal could have on the region. Based on very conservative assumptions, the uncapped model could increase the income of some Pacific Island countries by around 300–400 per cent over the next 25 years. To be clear, that is the increase in income for the entire population of those countries, not just the income of those who have migrated. While the less ambitious capped model would obviously have a less transformational impact on the people of the Pacific Islands region, it would still deliver benefits far greater than Australia’s existing aid program.

Our estimates reflect a view of development as something that affects people rather than place — if a policy lifts many Pacific Islanders out of poverty, it matters little where it happens. We are conscious that this focus is a different way of thinking about development, but conventional thinking is clearly not working in the Pacific.

There are, of course, risks and costs associated with either model and this Analysis explores some of these, as well as ideas that might help to mitigate them.

DEVELOPMENT CHALLENGES FACING THE PACIFIC
In 2006 a seminal report published by the Australian Agency for International Development (AusAID) highlighted the poor development performance of Pacific Island countries. The region, the report noted, suffered from high unemployment, social and political instability, and serious crime. Some countries also faced daunting health and environmental challenges. Without an upturn in economic growth, the future for these countries was bleak.[10]

A decade on, that statement remains true. Aid and remittances have played an important role in avoiding a failed Pacific region. However, at best, the Pacific continues to muddle through, unable to achieve a stable economic or human development growth path. The twin tyrannies of small size and extreme isolation have made it all but impossible for regional states to follow a conventional growth path, and have left the Pacific as the most aid-dependent region in the world. 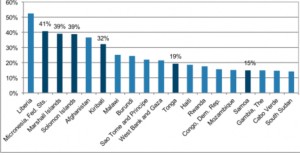 Note: Palau and Vanuatu are ranked 21 and 22

Scholarship on global growth and development over the past two decades has shown that institutions are critical to development.[11] However, institutional quality in the Pacific is low and shows few signs of improvement.[12] There are worrying trends in some countries towards further consolidation of power for the elites.[13]

Furthermore, the pressures on the Pacific are only likely to get worse. The Pacific is one of the world’s most natural disaster prone regions, contributing average annualised losses of 6.6 per cent of the GDP for Vanuatu and 4.4 per cent of the GDP for Tonga alone.[14] Climate change will exacerbate these vulnerabilities, increasing the intensity of natural disasters and threatening the entire existence of atoll states, such as Kiribati and Tuvalu.

Demographic challenges add to these problems. The median age in Melanesia is 22, while in Polynesia and Micronesia it is 26. Australia’s median age is almost double that at 37.5.[15] This dramatic youth bulge shows no prospect of slowing down, with the population of the region forecast to grow by 49 per cent over the next 25 years, again double the forecast for Australia.[16]

These trends will severely test the resilience of Pacific Island states and prevent them from prospering.