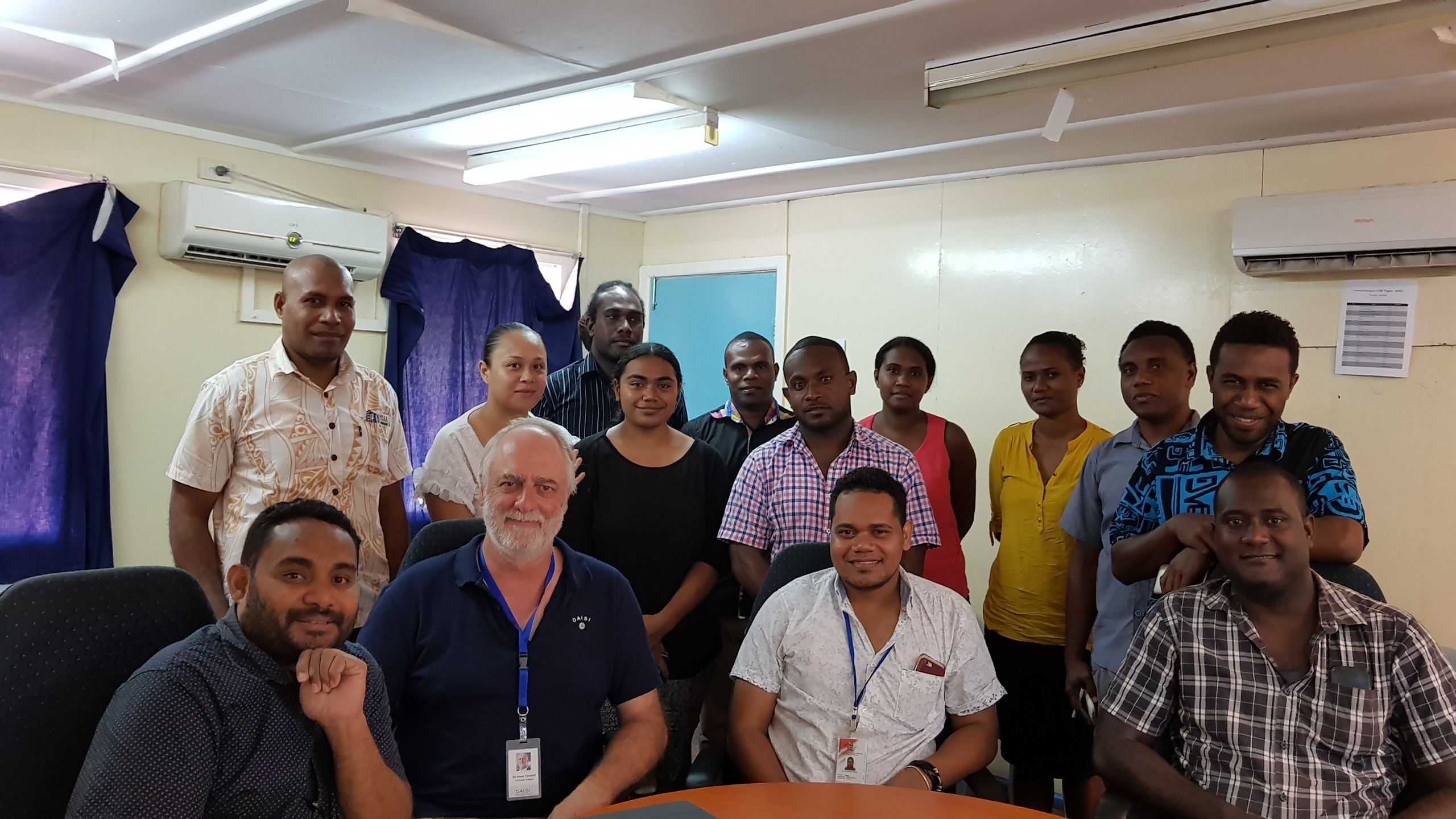 I had been asked to visit Honiara by DAISI to assist with operations for rectal cancer. On the 13th of April I boarded flights to deliver me to the National Referral Hospital in Honiara. I was met by Dr Scott Siota who was the sole general surgeon for the hospital during my visit.  The plan was to perform rectal resections for 2 patients with rectal cancer. One who had been seen a day prior to my arrival did not attend opting to try traditional medicine. However the second patient a 29 year old man with a lower 3rd rectal cancer proceeded to operation. The procedure, an ultralow anterior resection with covering loop ileostomy, was performed with left colonic mobilisation and division of IMA&V via the laparoscopic and rectal dissection was performed open. Fortunately I had been advised to bring a lipped St Marks pelvic retractor which made the dissection possible. A primary anastomosis at the level of the anorectal junction was performed and a covering stoma formed. 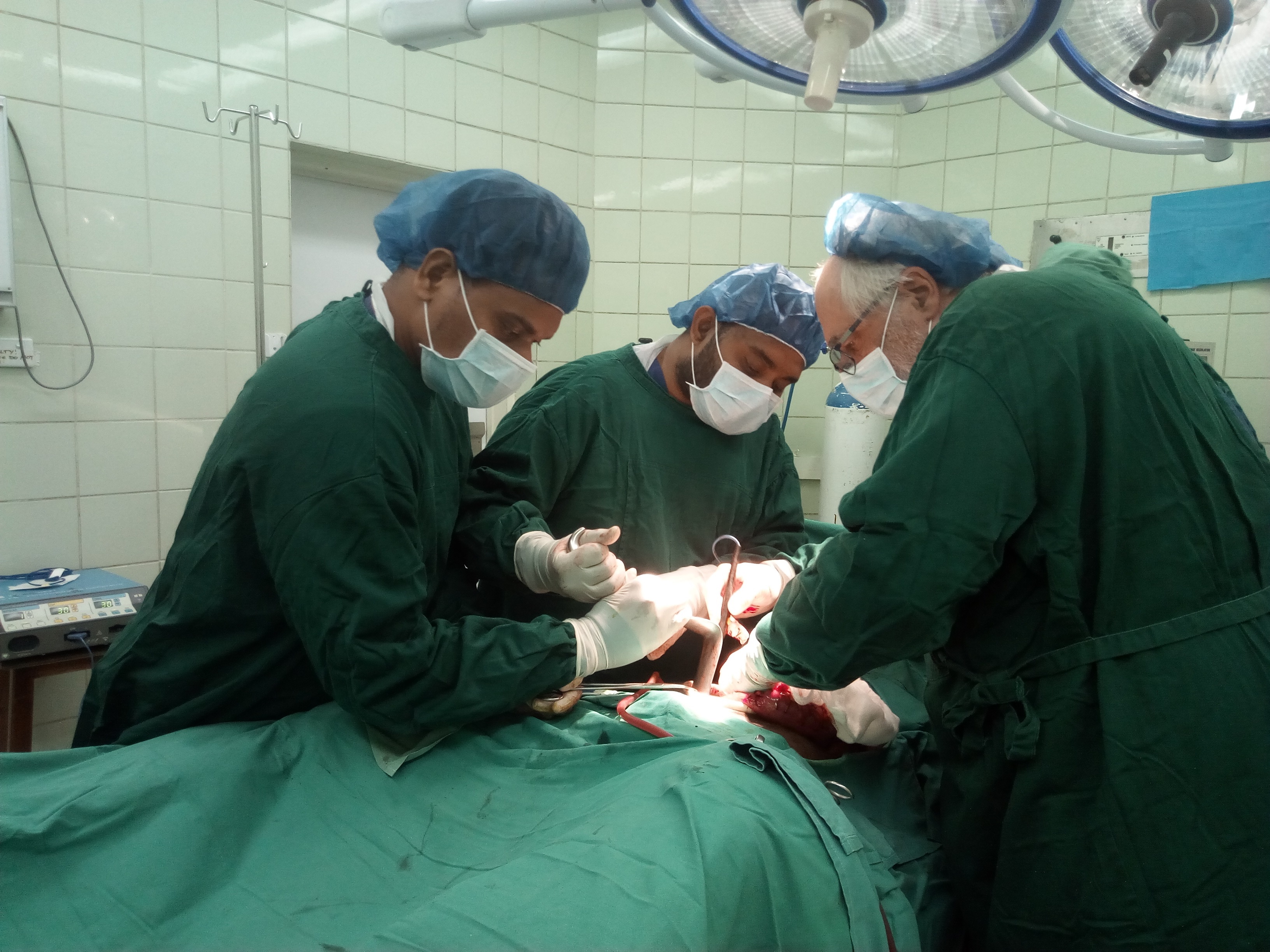 Prof Peter Hewett (right) with general surgeon Dr Scott Siota (centre) and surgical registrar Dr Stallone Kohia at NRH doing open part of pelvic dissection using St Mark’s pelvic retractor.
In addition an emergency procedure was required for a 60 year old female with an obstructing tumour of the sigmoid colon with disseminated disease. An extended right hemicolectomy was performed.
I had brought disposable laparoscopic trocars, Alexis wound protectors and staplers with me.  On seeing these Scott showed me three cartons of disposable items that had bee donated previously.  We spent a happy 3 hours sorting these out. The outcome of this is that there are a lot of disposable lap trocars to be used. The surgeons currently use non disposable trocars and given the uncertainty of medical waste disposal this seems to be reasonable. I would suggest no further trocars are donated. There are a large number of Weck and Hem O Lock but no applicators. Numerous tissue staplers with reloads are present. Disposables for urology and orthopaedics were also discovered and sent to the relevant departments. 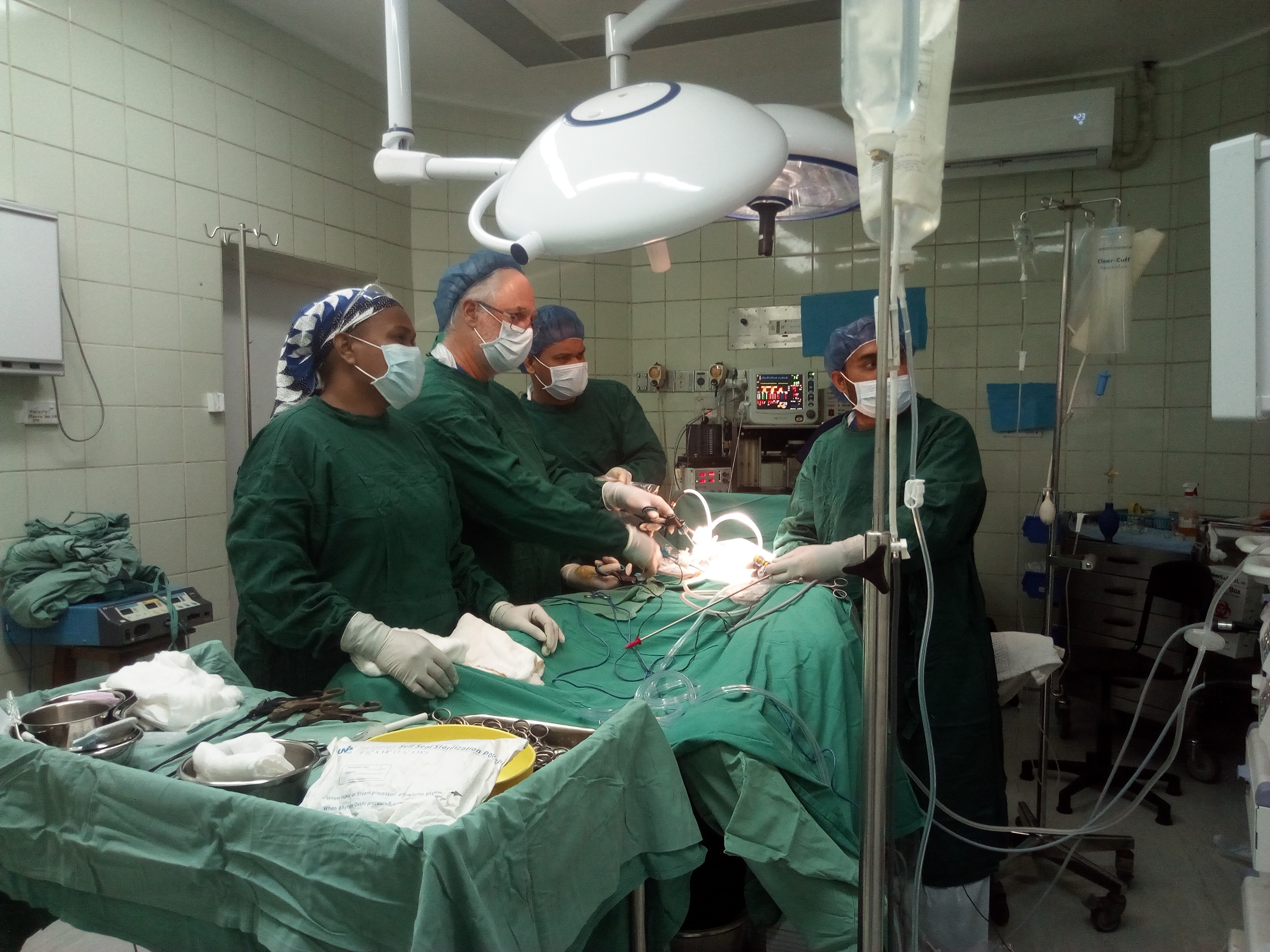 Prof Peter Hewett (left) with surgical registrar Dr Stallone Kohia  (centre) and Dr Scott Siota (right) doing laparoscopic anterior resection at NRH.
A new endoscopy room has been built and will be fitted out by American and Australian GI societies. This appears to be an well built facility which should improve the endoscopic service considerably.
I was also able to give a tutorial on rectal cancer to the surgical department. This seemed to be well received.
The visit gave me an insight into the difficulties of surgery in the Pacific Islands. The main challenge is the epidemic of surgical complications of type 2 diabetes. Two thirds of the surgical beds were occupied with such cases mostly amputations. Despite what minimal diagnostic services the work carried out at NRH is done enthusiastically and is of high standard.
Thankyou to DAISI for giving me such an interesting opportunity. 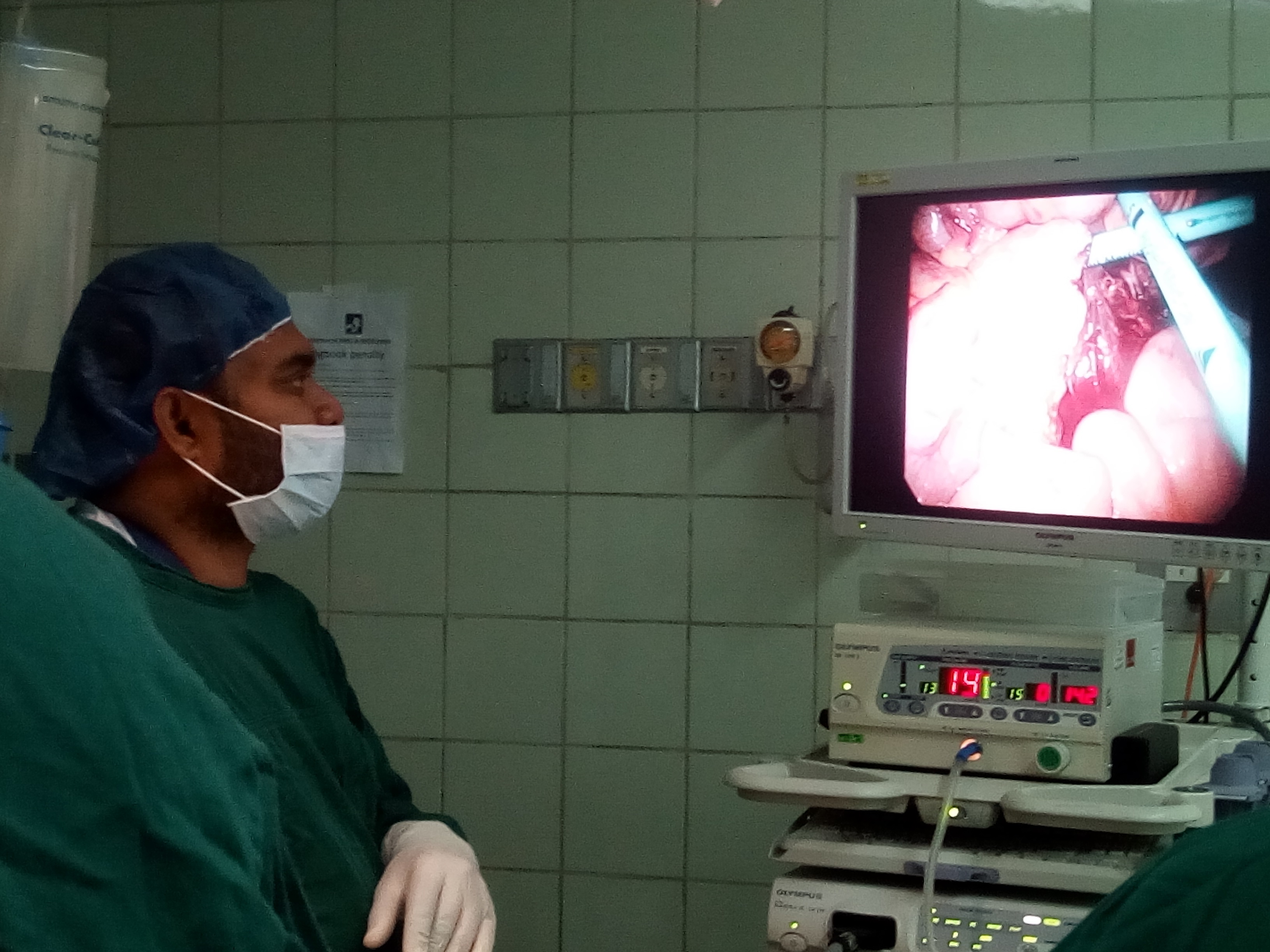 Dr Scott Siotta looks on during laparscopic anterior resection.
Author: Prof Peter Hewett, is a DAISI member and a colorectal surgeon from Queen Elizabeth Hospital in Adelaide, and has been instrumental in establishing laparoscopic colorectal surgery in Australia, being a lead investigator of the ALCAS & A La CaRT laparoscopic colorectal surgery trials.  Prof Hewett volunteered at National Referral Hospital (NRH) in Honiara in April 2018 on the specific request of local surgeons, with the emphasis on teaching basic diagnostic laparoscopic skills and open rectal cancer surgery.  Prof Hewett is keen on teaching and establishing formal teaching sessions aimed at educating the next generation of surgeons in the Solomon Islands, with the next trip planned for November 2018.