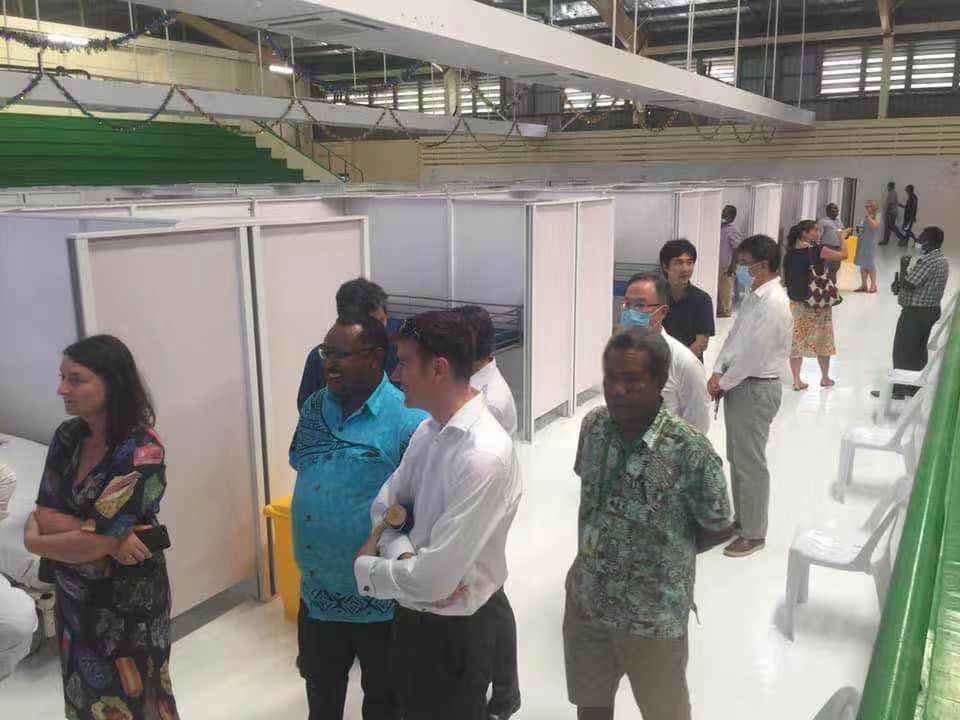 By G D | COVID ward opens in Honiara | No Comments

The recently opened 56-bed field hospital in Honiara, which has been totally funded by Solomon Islands Government through The Ministry of Health & Medical Services (MH&MS), is now ready to take patients.  The Order of St John has been working closely with MH&MS on the project.  They have provided 8 stations which will monitor the more serious patients and will provide additional St John Ambulance Service nurses to cover staff shortages when necessary.  St John Ambulance Service will also provide all covid-19 patient transport, as mandated by the current state of emergency provisions.

The country is lucky to be able to call on locals who have experience in handling infectious disease outbreaks.  The Chief Advisor to the Ministry of Health & Government was formerly the World Health Organisation (WHO) representative in Africa for Ebola, and the Head of St John, Mr Doug Kelson, set up two field hospitals in PNG to handle the cholera outbreak about 12 years ago.

In his weekly address, Prime Minister Manasseh Sogavare spoke at length about the new facility.  He outlined the role of the hospital in caring for asymptomatic patients as well as those with mild to moderate signs of the virus.  He added that any patients showing severe signs of covid-19 would be treated at the National Referral Hospital’s isolation units.  Mr Sogavare explained that the project was entirely funded by the government due to the urgency of the situation, and that the process of applying for donor funding would have taken too long.

So far Solomon Islands has been largely successful in keeping the virus out of the country.  For months it had no cases at all.  The first case was reported at the beginning of October shortly after international students were repatriated from The Philippines. 400 students had been stranded there after the country went into lockdown.  Despite having tested negative 3 times before being repatriated, the student tested positive after arrival in Solomon Islands.  The current tally is 17 cases, with 5 having made a full recovery.  Whilst there has yet to be any cases of community transmission, it is a widely held belief that this is only a matter of time, and that within the next 8-10 weeks we will see cases of community transmission.

The Prime Minister acknowledged this in his speech, remarking ‘This is the first of its kind in Solomon Islands, an important achievement in our ongoing fight against the deadly virus.  The completion of the field hospital will further enhance our preparations for various possible scenarios, including community transmission if it may arise’

Ian Hosking-Richards is the current Sponsorship Officer for DAISI, and also, in his own right, the Founder of The Solomon Foundation, and the current Solomon Island’s Honorary Consul (Elect) for NSW. Ian has been actively involved on many fronts improving the delivery of medical services to the Solomon Islands. Ian has been actively involved with DAISI in the establishment of a cardiac assessment and rehab service at Gizo Hospital and National Referral Hospital and in providing surgical services to Solomon Islands requiring treatment in Australia. Both DAISI and The Solomon Foundation enjoy all the benefits of this working partnership.